Nancy Huhn
As Told By Nancy, herself

Nancy’s battle with lung cancer ended in December, 2015.  Here is her story in her own words:

My name is Nancy Huhn. My cancer diagnosis was five years ago, October 16.

However, the medical story begins probably 3-4 years prior when I started complaining about chest pain. I had several visits to doctors including an emergency room run because of the severe pain in my chest. At each of these occasions I was given a heart stress test and told “your heart is fine”.

At one point during that ER visit, I told the attending nurse. “ My chest hurts really bad right now. Is there anything going on with the monitors?”“No, honey. Your heart is fine. Do you smoke?”“No. I am continually asked that question. If I answered it differently, would you do something different?” She just stared at me. I got the feeling she thought I was a hypochondriac looking for attention. In fact, it was I who asked for a chest xray a month later from my primary care physician.

This brings to light the fact that the medical profession is geared toward lung cancer caused only by smoking. I’ve told this story to many, including those in the medical profession. Many are surprised to learn I have not pursued legal action. What’s that going to get me? The end for me is the same. Instead, I try to use my experience to educate others who ask me about my cancer about the dangers of radon gas in homes and how to get their home tested and mitigated. 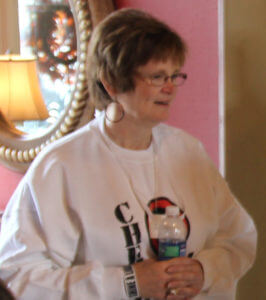 The oncologist I saw here in Louisville told us the cancer was Stage 4 – mostly in the right lung, some in the lymph nodes and not curable. Surgery was not an option. He suggested that I go to a regional cancer center and try to get into a clinical trial. I was very fortunate that my timing was such that a clinical trial was opening up at Vanderbilt that included Avastin and Tarceva (or a placebo). After my first chemo treatment the lung tumor shrank more than 25%. I was ecstatic.

Less than one year into the Avastin study, in a routine eye exam, we found cancer in my left eye. Not knowing if it was there before the lung diagnosis or not, we could not be sure if it was “re-occurrence”. After several months of tracking the spot on my eye, we determined it was growing. I had to stop my treatment of Avastin and make arrangements to undergo radiation on my left eye for three weeks in Nashville.

I was really not surprised to learn that the drug I was taking on the Avastin study, was a placebo vs Tarceva. And that turned out to be a good thing, because now I was eligible to be in a study where Tarceva was paired with another experimental drug.

This new study, however, will require weekly infusions of the experimental drug. For another year and half I traveled to Nashville each Monday. Many here already know that Tarceva, is a mean little pill. It basically dries you out to the core and the fact that any and all food consumed moves through you like a freight train causes you to choose your foods very carefully. But these side effects are better than the alternative.

The next surprise comes one cold, January morning in 2010 when I try to speak and there is no voice. I didn’t feel ill, but it was as if I’d had a bad sore throat and lost my voice. After visiting a local ENT specialist I learned my vocal cord was paralyzed. Specialists at Vanderbilt explained to me that there is one central nerve that goes down from your brain into the chest cavity near the heart and lungs that controls the vocal cords. The lung tumor was pressing on this nerve. 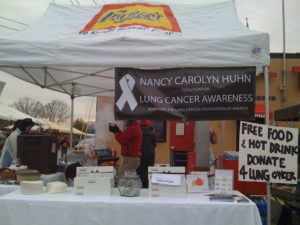 paralyzed vocal cord so it could touch the other vocal cord and be productive in making sounds. It was nice to be able to speak and be heard after nearly 3 months of “laryngitis”.

A few more months go by and I am starting to experience some occasional pain in my left hip. I don’t pay that much attention until it becomes necessary to lift my left leg to get into a car. Bone scans confirmed the cancer was now in my left hip.

That was July 2010. My doctor would like to do another biopsy. She wants to test my tumor to see if it is positive for the ALK marker. If I have the marker, there is a study she’d like to get me in, but first we must do radiation on the hip. So I’m back in Nashville for a 16 day stay of radiation to my left hip and my chest so we can get that tumor off of my vocal cord nerve. After testing at two different labs, it is confirmed that I do in fact have the ALK marker. This is wonderful news. A very small % of people with my particular kind of lung cancer have this marker and there is a drug. However, at the time, the drug was only available through a clinical trial study. In every study there is a control side and an experimental side. I got the control side of the study once again. I must do chemo treatments every three weeks until there is progression on the lung tumor. That was last fall.

In January of 2011, scans show that the tumor has “changed”. I am now eligible for the crizotnib, now also known as Xalfori, pill that is shown to be effective on patients with the ALK marker. Within a few short weeks, I find myself walking with more energy. I can tell the patches of baldness on my head are filling up with hair again. In the 9 months since I started the drug, I’ve been lucky enough to experience some shrinkage on my lung tumor, the bone scans are showing improvement and one of the three spots on my liver is no longer visible. In addition, the eye remains stable. I am so very grateful and feel very blessed to be able to say I made it 5 years. Now it’s up to my liver and kidneys to tolerate all the medicines they have filtered through my body for the last five years.

That sums up the medical journey, let me share with you the people part of this journey.

Of course when friends and family first hear of your diagnosis, the cards and well wishes are overwhelming. It’s the endurance so many shown that you truly appreciate.

Through it all, my employer has allowed me to continue working. Working gives me the purpose and focus that I need to know that this cancer is only a nuisance, not a death sentence. I chose to think of it as a lifelong disease, such as diabetes.

Many of my co-workers have sponsored fund raisers for the last four years raising over $5000.

There are the total strangers who offer their support. For example, the clerk at my local Kroger during that first round of chemo leans over the counter to say, “Are you doing chemo? Hang in there, it gets better.”

My bunco friends of 30 plus years—who very cleverly threw a surprise birthday party on my 51st birthday. Two years ago, a smaller group of them showed up at my house one day when we were not at home to pull weeds and trim the overgrown shrubs. I think our neighbors were just as grateful as we were.

Several friends and family have joined me on my trips to Nashville. Whether it’s overnight or several days in a row during my two radiation stints. People continue to say, when can I go to Nashville, I want to help. I think maybe they heard about some of the shopping excursions my daughters and I have enjoyed occasionally.

Others will randomly show up at our home with soup, cookies, and even full dinners.

Speaking of dinners…. My husband has made countless dinners and ladies, he cleans! He will randomly wake up early and scrub the kitchen floor. His support never fails.

And of course, my daughter and her co-worker, Rick, made sure I had the best looking hair piece in the city.

One close friend, after I admired her coat, went and bought me the same coat! She knew I really liked it and I was in need of a coat after some significant weight loss from Tarceva.

And even now, five years into this adventure, I receive cards like clock work from two aunts.

And then last year for my birthday as I was in the midst of some nasty chemo days, my entire family of brothers, sister, son and daughters and all the in laws, that come with them, along with sisters of sisters in laws – a crowd no less — met at a nearby parking lot waiting for my husband and I to leave town for another treatment. Once we were gone, this entourage converged on our home for two days to do projects we’d not had the time or energy for in the past four years. They cleaned and scrubbed, painted inside and outside. They removed tree limbs damaged in a windstorm, pulled weeds and trimmed hedges. My son even arranged to have the back door replaced that had been rotting allowing cold air and even the occasional rain inside for a couple of years. 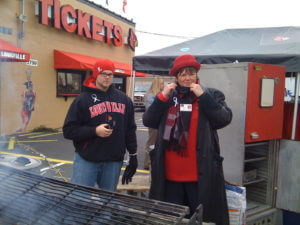 I wouldn’t have fought this fight without the encouragement and support of family, friends, co-workers and total strangers. Two wonderful grandchildren help me continue that fight as well.

Thank you to all who have worked in and around the health care industry and the clean air industry so that we and future generations dealing with lung diseases can find some hope.

Meeting others who have gone through what I have and seeing that they live life to the fullest every day lives gave me immense hope.

I am but one face of lung cancer.  There are many others.

I would like to ask other lung cancer survivors out there to join me and share the story of how you came to be a survivor.