January 16th, 2019
What happens when the doctor blames you for your own cancer? 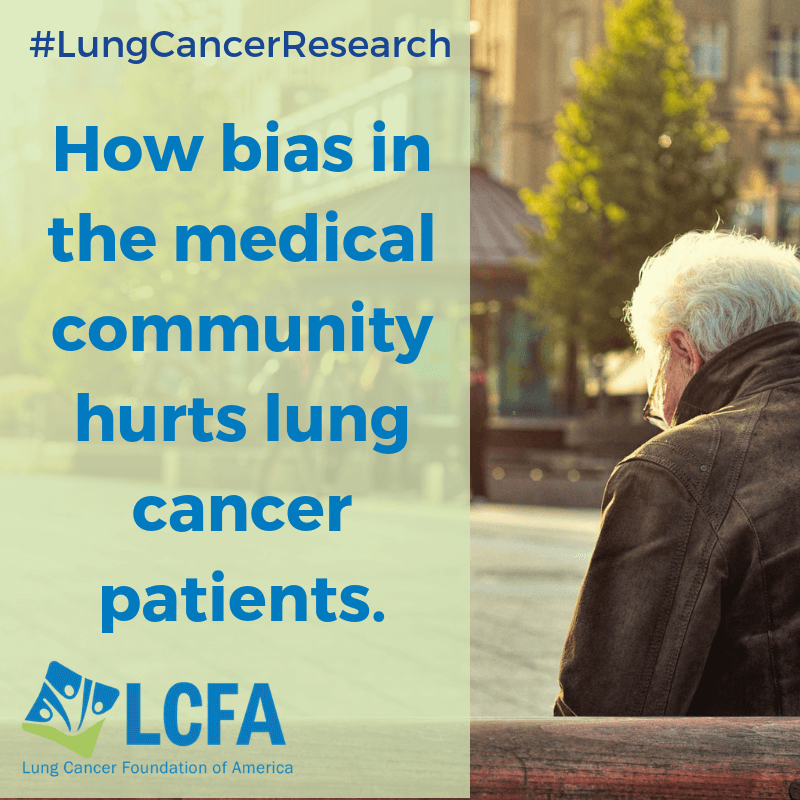 How bias in the medical community hurts lung cancer patients.

Not long ago, I was working in a busy teaching hospital’s intensive-care unit, poring over EKGs, examining X-rays and reviewing medication orders. I received a phone call. Results were in for the lung biopsy of one of my patients, Ms. X. She had cancer.

The news shook me. Ms. X hugged us at the end of every visit. She had worked for decades as a seamstress and hoped to retire soon. A resident overheard my conversation. “Did your patient smoke?” she asked. “No,” I said. The trainee sighed and shook her head. “When a person who doesn’t smoke gets lung cancer . . . that’s just unacceptable.”

I was stunned by her implication. Was a cancer diagnosis in a patient who used tobacco more acceptable? It is a tragedy when any patient develops lung cancer. They will undergo surgeries, toxic infusions and lonely nights in the hospital. Many will face crushing financial pressures and be forced to confront their mortality in unimaginable ways. Why would we mute our sympathy in this moment?

About half a million Americans alive today have been diagnosed with lung cancer at some point in their lives.

As a pulmonologist practicing in a disadvantaged community in Oakland, Calif., I evaluate patients with potential lung cancer every day. About half a million Americans alive today have been diagnosed with this disease at some point in their lives. Though treatments evolve, there’s an old standby that the medical establishment keeps dishing out to these patients: shame and blame.

The hard-working resident was just echoing what she had been taught for years in medical school. Her conclusion was drawn from American medicine’s “hidden curriculum”: the assumption that individual will is destiny and that patients who behave imperfectly can be blamed for their illness. At hospitals across the country, I’ve seen health-care providers use language that separates “deserving” from “undeserving” patients.

As a trainee at an academic medical center, I observed weekly conferences where the care plans of new cancer patients were determined by a large team of expert physicians. The words “lung cancer” — followed by “nonsmoker” — often elicited murmurs of sympathy. I wondered whether this sympathy would lead to longer and more meaningful clinic visits with the patient in question, and whether the opposite would be true for the Vietnam veteran who had smoked for 40 years. The tight link between tobacco and lung cancer has hardened into stigma, and the potential for care disparities is real.

There is little research measuring how physicians’ biased attitudes affect outcomes for smoking lung cancer patients, but a number of studies point to its likely negative impact. One questionnaire-based study revealed that physicians were less likely to offer advanced lung cancer treatments to patients who were smokers vs. comparable nonsmokers. Scientific reviews have shown that physicians who harbor biased attitudes toward their patients often ask fewer questions during visits, order fewer tests and offer suboptimal therapies. Over the past decade, I’ve seen hundreds of tobacco-using patients who were treated this way at some point in their care journey — their coughs ignored, their symptoms minimized, their stories unprobed.

Lung cancer accounts for 25 percent of our nation’s cancer deaths.

The stigma goes far beyond the medical community. Lung cancer accounts for 25 percent of our nation’s cancer deaths but receives only 10 percent of cancer research dollars. Some in the field believe that donors give less to lung cancer research because of the perception that the disease is self-inflicted. Research and anecdotal data show that lung cancer patients receive less support from their friends and neighbors than those with other cancers, making their disease more difficult to bear. A 2004 study from the BMJ notes that some patients hid the illness because of stigma, at times resulting in worrisome financial consequences and increased emotional distress.

Smokers, in particular, are shamed more vocally than other patients who develop diseases with a strong behavioral correlate. When a well-known person dies of a heart attack, the obituary seldom notes their sedentary lifestyle or dietary choices. But when a brilliant former colleague, the late physician and writer Paul Kalanithi, was being treated for lung cancer, newspaper articles made it a point to mention that he didn’t smoke . He wasn’t one of those who had brought cancer on himself, the stories implied.