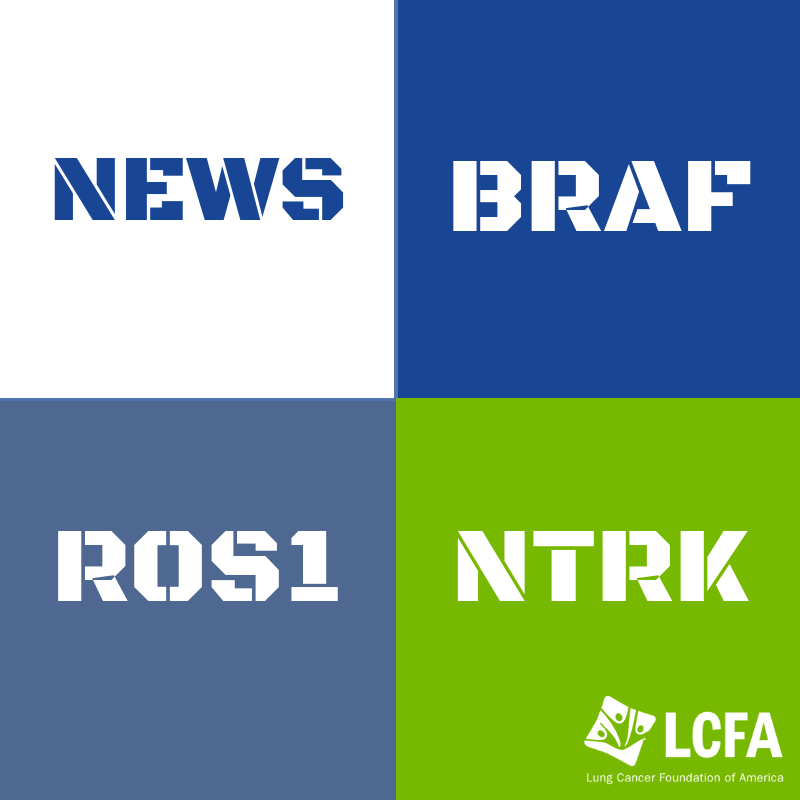 The scope of targeted therapies has extended more in non–small cell lung cancer (NSCLC), especially with the recent FDA approval of larotrectinib (Vitrakvi) for patients with NTRK gene fusions irrespective of the primary tumor type. A growing focus on smaller oncogenic drivers in lung cancer has opened up new treatment options and many potential drugs in development for patients with less common alterations.

ROS1 translocations or rearrangements occur in about 1% to 2% of patients with NSCLC, and usually only in those with a nonsquamous histology. Baik explained that ROS1-rearranged NSCLC usually occurs in younger patients who are never smokers, such as LCFA speaker Lysa Buonanno.

Currently, only crizotinib (Xalkori) is FDA-approved for the treatment of patients with ROS1-positive NSCLC. However, Baik said that patients with ROS1 will eventually develop resistance to crizotinib and progress, requiring further treatment. The reasons for disease progression on crizotinib are typically either central nervous system (CNS) failure or acquired resistance, which develops in about 50% to 60% of patients.

Several next-generation tyrosine kinase inhibitors (TKI)s are in development for treating patients with ROS1-altered NSCLC. Baik pointed out 2 agents that are active against CNS disease but are not reliably active against resistance mutations: ceritinib (Zykadia) and entrectinib. Ceritinib has already been approved for the treatment of patients with ALK alterations and also shows activity against ROS1.

In a phase II study of 32 patients with ROS1 rearrangements performed in Korea, ceritinib induced an objective response rate (ORR) of 67% in patients who did not receive prior treatment with crizotinib.2 The study had previously looked at patients who had received prior treatment with crizotinib but no responses were seen in pretreated patients, Baik explained. The median PFS in the overall population was 9.3 months, but in crizotinib-naïve patients, the median PFS was 19.3 months.

“That’s one more important distinction that you should keep in mind, that ceritinib is active after crizotinib in ALK-positive patients, but not in ROS1-positive patients,” Baik said. “The situation where I can think about using this drug are those patients who are crizotinib naïve who have enough CNS disease where we might be thinking about whole brain radiation unless the patient wants to postpone whole brain radiation.”

Entrectinib is a TKI that is active against ALK, ROS1, and NTRK, while it is not yet FDA approved, Baik noted that it will likely be approved in the near future.

“There are a number of drugs that are showing very compelling preclinical data but we really don’t have enough clinical data for us to really comment at this point, from a clinical practice standpoint,” Baik noted. She said that as of now, she treats patients with ROS1 rearrangements in the first line with crizotinib as it is well tolerated and most patients will have long disease control with this agent.

Although the proportion of BRAF mutations in NSCLC is approximately 3% to 5% overall, there are only clinical trial data available in NSCLC for BRAF V600E mutations, which make up approximately 1% to 2% of NSCLCs. Baik noted that while BRAFV600E mutations are mostly seen in adenocarcinomas, there are no further associations with clinical characteristics such as age or smoking history. “I think that this is a patient population where we really do need to make an effort to test everyone, regardless of smoking history,” she said.

Unlike with most other oncogene-driven lung cancers, BRAFV600E requires a combination approach of both BRAF and MEK inhibition, Baik said.

Baik called NTRK the “newest kid on the block” in terms of oncogenic drivers in NSCLC. She explained that there can be NTRK alterations and NTRK fusions, and the fusions are the really important oncogenic alterations that oncologists should care about. In NSCLC, the frequency of NTRK fusions is approximately 1% to 3%.

Larotrectinib was FDA approved in November 2018 for the treatment of adult and pediatric patients with an NTRK genetic fusion without a known acquired resistance mutation. She said that larotrectinib is a “very active drug that is quite durable in terms of disease control, and it is very well tolerated.”

Other NTRK inhibitors currently in development include entrectinib, repotrectinib, and DS-6051b. “Now that we have 5 targets [with approved targeted therapies in lung cancer], and more to come, I think this really underscores the importance of comprehensive tumor genomic testing,” Baik concluded.