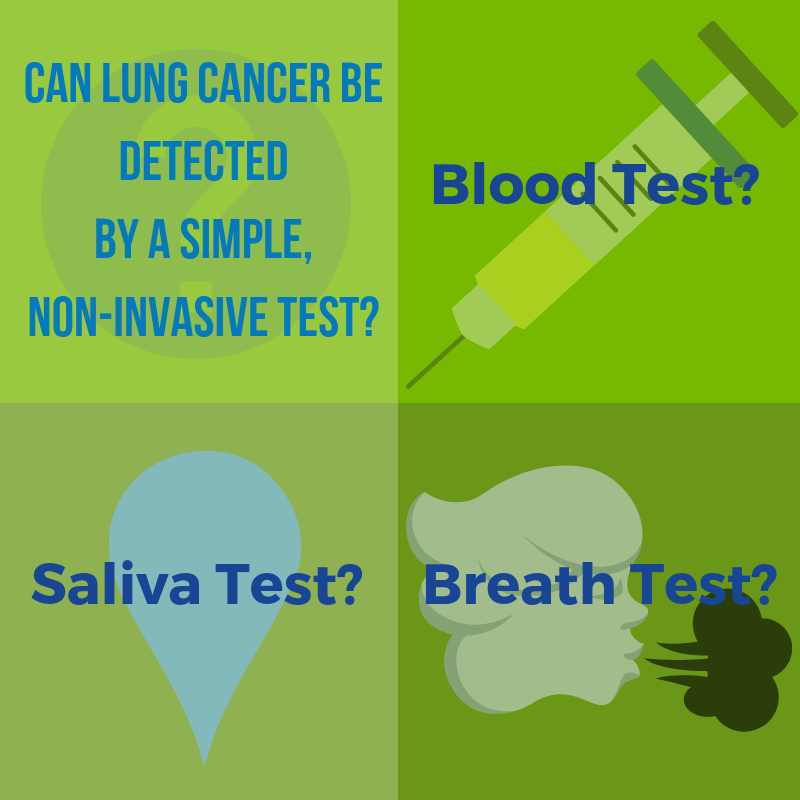 Blood, saliva and even breath may one day be able to diagnose lung cancer.

Lung Cancer is the no. 1 cancer killer in the U.S. “In fact, it kills more people than the next top three cancers combined,” which are colorectal, breast and pancreatic cancer, says Dr. Desmond D’Souza, a thoracic surgeon and assistant professor of surgery in the division of thoracic surgery at the James Cancer Hospital and Solove Research Institute at The Ohio State University.

According to the American Cancer Society, lung cancer is estimated to kill 154,050 people in 2018. Breast cancer is expected to claim 41,400 lives this year, while colorectal cancer will kill 50,630. Pancreatic cancer will add 44,330 people to the toll, for a total of 136,360 estimated deaths from these three types of cancer in 2018. Clearly, lung cancer is an enormous problem.

A primary reason why lung cancer is so deadly is because it’s often detected at later stages than some other cancers. Lung cancer currently does not have a widespread and easy to implement screening test available compared with other cancers – think the annual or biannual mammogram for breast cancer, routine pap smears for cervical cancer, colonoscopies for colorectal cancer and so on. Therefore, lung cancer is typically spotted later on when symptoms begin or accidentally when the patient is being treated for something unrelated.

CT scans have recently become more prevalent after studies showed they offered survival benefit to high-risk patients by detecting cancers earlier. But they have some drawbacks, such as exposure to radiation and being expensive, thus they are only recommended for those at highest risk of cancer.

If researchers could develop a less invasive way of testing for lung cancer, that might reduce the number of lives the disease claims each year, D’Souza says. Currently efforts are underway to develop reliable liquid biopsies, a technique that looks for tumor DNA in blood samples. This less invasive technique holds a lot of promise, and clinical trials are getting underway to determine whether this approach can reliably diagnose lung cancer or help predict prognosis.

The goal is to eventually develop a simple screening test that most anyone can get inexpensively. Noting the routine blood test that can measure early signs of prostate cancer – the PSA test – D’Souza says the hope is that one day a similar test might be available to test for lung cancer, particularly because current screening technology for lung cancer really only addresses high-risk individuals, but lung cancer rates in never-smokers are on the rise.

“There’s a huge segment of people in the United States who were never smokers,” but who may have been exposed to other risk factors such as radon, says D’Souza. “There’s really no good way of screening never-smokers, and there’s no way of picking up on lung cancer [in those people] unless it’s incidentally detected,” so the hunt is on for more accurate, inexpensive and less invasive means of making lung cancer screening more widely available.

In addition to looking for biomarkers in the blood, researchers are investigating whether other bodily fluids may provide insight into diagnosing lung cancer early. Researchers in the salivary diagnostics lab at the UCLA School of Dentistry are analyzing molecules in saliva, including DNA, RNA, proteins, metabolites and microbiota to determine whether these elements hold clues as to the individual’s cancer status. In a 2016 paper describing this work, the researchers describe saliva as a “biological fluid composed of more than 99 percent water and less than 1 percent proteins, electrolytes and other low-molecular weight components.” More than just a component of digestion, saliva may show changes in the concentrations of certain biomarkers, which perhaps could be used “to detect early-stage cancer or to monitor the response to therapeutic management. Salivary diagnostics is a non-invasive, easy to use tool for patient specimen collection.”

Currently, lung cancer diagnosis is typically made after a surgical biopsy procedure to remove tissue from the lungs. Depending on the location of the tumor, this is often major surgery that is highly invasive and carries some risks to the patient’s overall health. By eliminating the need to cut into the body in such a drastic way to harvest a sample of biomaterial, salivary diagnostic technology offers an appealing way to detect cancer sooner and with less trauma to the patient. Such techniques are currently under development and their use in the clinic is still likely a long way off.

In yet another potentially groundbreaking approach, researchers at Memorial Sloan-Kettering Cancer Center in New York City are investigating whether a patient’s breath can reveal clues about their cancer status. Led by Dr. Gaetano Rocco, a thoracic surgeon at MSKCC, the program seeks to analyze the air patients exhale to determine which compounds are present and whether any of them could signal that cancer is present in the lungs.

“The air we exhale is filled with compounds – also called Volatile Organic Compounds or VOCs – that can be measured and associated to both inflammatory and cancerous conditions in the body,” Rocco says. “More than 3,000 VOCs have been identified as an expression of the cellular metabolism. However, only 20 to 30 are usually found in all individuals. VOCs are conveyed through the bloodstream from their originating sites into the lung and exhaled in the breath.” If these VOCs can be harvested and analyzed, the theory goes, they might tell doctors a lot about the patient’s health.

New, non-invasive detection techniques like these are possible thanks to lung cancer research.