May 7th, 2019
Lung Cancer Stigma: Not Just the Patient’s Problem 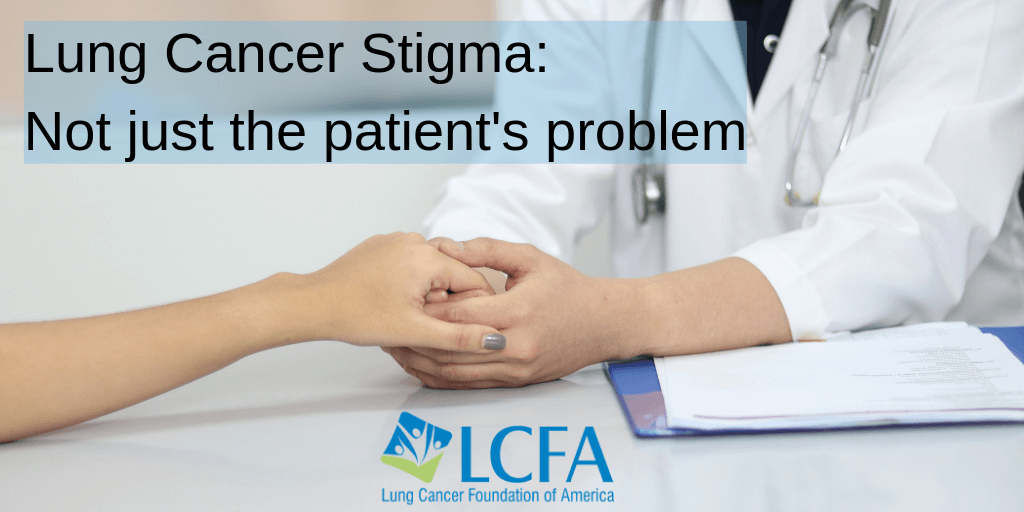 How healthcare professionals have an impact – for better or worse.

Yes, according to one new study, which found that higher internalized stigma was linked with declines in physical and functional well-being. Then on a related note, other researchers took a look at how stigma affects other people involved in the lung cancer care process, including caregivers, their social network, and those in the healthcare field.

Feeling Bad All Around

Annette L. Stanton, PhD, of UCLA, and colleagues, conducted a longitudinal study to characterize the relationships of internalized stigma and “constrained disclosure” — defined as avoidance of or discomfort about disclosing one’s lung cancer status to others — with emotional and physical/functional outcomes.

The researchers pointed out that relevant sociodemographic and medical characteristics can be used to pinpoint patients most likely to have physical and psychological morbidities, but these factors cannot be changed through intervention. “Therefore, it is important to identify malleable psychosocial factors that predict well-being and can potentially be harnessed through intervention,” the team wrote.

The study population consisted of 101 lung cancer patients, of whom more than half were male, with an average age of 64.5, and approximately 64% were current or former smokers. All were on active treatment at the time of the study. They took questionnaires on stigma and well-being at study entry and at 6- and 12-week follow-ups. Of these, 79% completed the 6-week assessment while 68% finished the 12-week one.

Physical/functional well-being was measured with The Trial Outcome Index, which is a subscale of the FACT-L, and was computed as the sum of 21 lung cancer-specific symptoms, such as nausea, shortness of breath, or inability to work.

Stanton’s group found that, at each assessment, emotional and physical/functional well-being was not associated signiﬁcantly with cancer type (non-small cell lung cancer vs other types, P>0.44 for all), current oncologic treatment (immunotherapy or targeted therapy, chemotherapy, and combination therapy, P>0.16 for all), disease stage (stage IV vs I-III, P>0.14 for all), history of chemotherapy (P>0.16 for all), or previous lung cancer-related surgery (P>0.28 for all).

With regard to constrained disclosure, these levels were comparable across all smoking groups, the researchers found. Constrained disclosure was associated with adverse psychological and physical/functional well-being, independent of internalized stigma. “Constrained disclosure may contribute to poorer health outcomes by preventing patients from seeking social support or processing their thoughts and feelings with others, which can be adaptive strategies for coping with cancer.”

What can lung cancer specialists do to address these issues? Stanton’s group suggested that “affective or physiological hypervigilance associated with anticipated stigma should also be considered as potential targets for… interventions,” such as mindfulness- or acceptance-based therapies, and that future studies will need to look at long-term survivors.

“The ways in which stigma is experienced by patients and caregivers are remarkably similar, suggesting stigma by association, and this finding itself is consistent with stigma by association among families in which a member has a psychiatric illness,” according to another research group, led by Suzanne Chambers, PhD, of Menzies Health Institute Queensland in Australia.

That’s the conclusion they came to after examining the nature of the stigma experienced by lung cancer patients and their caregivers. “An integral aspect involves the extent of the role that beliefs about smoking play in stigmatizing processes,” Chambers and co-authors noted. “In turn, perceptions of the role of smoking as a visible mark of lung cancer are central to the integration of the different facets of analysis.”

Alex A. Adjei, MD, PhD, editor-in-chief of the Journal of Thoracic Oncology, agreed, pointing out that the stigma tied to lung cancer “is the causal relationship with cigarette smoking, which leads to the notion that patients’ behavior ’caused’ their own cancer.”

The study population consisted of 28 participants (18 female and 10 male; 16 lung cancer patients and 12 caregivers) recruited from clinical and support group networks in Australia, and interviewed individually in Queensland during April and June 2012.

“Smoking status was not collected, as it was accepted that asking a person with lung cancer whether they smoke is a stigmatizing question,” the authors explained.

During the interviews, patients or caregivers were first invited to tell their story from the start of their cancer journeys. Open questions focusing on their experiences with other people, physicians, the health system, and media were posed. Thematic analysis was done to analyze the interview transcripts.

The authors came up with the following three overarching themes:

For the perceived nexus, respondents reported the instant and inevitable connection laypeople made between the disease and smoking; their sense that lung cancer was considered a “lesser” disease compared with other cancers; and the need to hide the diagnosis, such as attributing shortness of breath to another respiratory disorder, such as emphysema.

The authors pointed out that the one participant who gave the emphysema example “ironically” still chose another chronic lung disease associated with smoking, “illustrating the potency of lung cancer’s stigmatizing association with smoking.”

As for moralization, the authors described it as being related to perceptions of smoking in industrialized cultures, such as in the U.S. and Australia. “In a moralized domain, the predominant emotional responses are shame and guilt,” especially for lung cancer patients who smoked. On the other hand, people diagnosed with the disease who did not have a smoking history, may feel a sense of moral superiority. In addition, moralization may give rise to stigma by association, wherein caregivers said they also felt shame and guilt. Caregivers reported that there was little social support for them, such as acquaintances failing to ask how the caregiver was coping.

Finally, for attacking the ties between smoking and lung cancer, respondents said they were often quick to point out other causes of the disease, such as asbestos exposure, or the fact that, at one point, smoking was socially acceptable.

Just as patients may benefit from cognitive behavioral therapy or other stigma coping treatments, caregivers may also derive the same benefit: “Our work suggests that caregivers of patients with lung cancer are potentially at an early disadvantage with regard to perceptions of low support and a sense of stigma, and it is important to establish whether this negative contrast ameliorates in time or remains stable,” Chambers and co-authors wrote.

Adjei said “the study demonstrated that there is a significant potential for caregivers of lung cancer patients to experience exacerbations of psychosocial distress as a consequence of widely shared negative views about lung cancer and its prognosis. All of us taking care of lung cancer patients need to incorporate the important findings of this study into the care of our patients and their families.”

“What is empathy?,” asked Peter Harper, MBBS, of the London Oncology Clinic, in his WCLC talk, entitled “Missed Opportunities for Stigma-Reducing Empathic Encounters with Thoracic Oncologists.” He cited a quote from To Kill A Mockingbird by Harper Lee: “You never really understand a person until you consider things from his point of view — until you climb into his skin and walk around in it.”

“How we truly see from another’s perspective, and I think it’s a very important point,” Harper explained in his talk. “I’m sitting as a doctor [with a patient]… we’re across a desk… I’ve got the power and they’ve got the illness, and you better be careful to remember how they’re feeling.”

Once upon a time, physicians may have skipped discussing smoking with lung cancer patients on the assumption that it was simply too late, but Harper cautioned against taking such a fatalistic approach: “You need to take a smoking history as part of oral history, and really it’s to up to you to help the patient stop smoking, because there is reasonably good evidence that, if they stop smoking even when they have cancer, that that will help them.”

However, Harper stressed that this discussion needs to happen in a way that is “enlightening and helpful,” without exacerbating stigma: “Doctors don’t say, ‘I’ve just looked at your X-ray. You tell me you smoke 20 [cigarettes] a day; but it was 60 — I can tell.’ We don’t say ‘You’ve kindly brought your wife with you [and] she’s a nonsmoker — does she really know how you’ve damaged her?’ We don’t deliberately do those things.”

Physicians should bear in mind that lung cancer patients who continue to smoke still feel shame, guilt, and embarrassment, so a compassionate, non-judgmental attitude from their healthcare team is key. Harper pointed out that smokers already face heavy criticism from all over: “I’ve read comments posted on our Facebook ads [recruiting smokers and/or lung cancer patients for clinical studies], and they say ‘Please quit because I hate smokers’ and ‘I would think having cancer would be enough to make them quit,”‘ he said, adding that he has even heard similar remarks from healthcare professionals.

These types of comments are predicated on the idea that quitting smoking should be easier after a lung cancer diagnosis, Harper explained. But clinicians need to keep in mind why many lung cancer patients took up smoking to begin with, and why they may continue after diagnosis.

“People assume quitting is easier after learning you have cancer, but it isn’t,” he said. “People need comfort, and cigarettes have given them comfort for many, many years. And now they’re in distress. They need that comfort. It also enables coping… and stigmatizing them as stupid, ungrateful, or destroying a second chance at life – all of which I’ve heard in my clinics — does not motivate them or enable them to quit.”