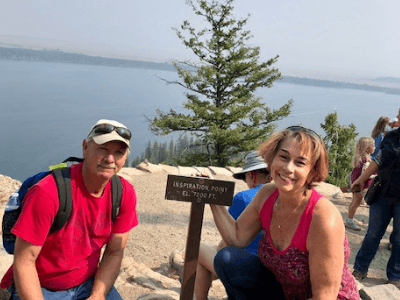 Amy Hyman
As Told By Lung Cancer Foundation of America

Amie Hyman-McPartlin, passed away on December 6, 2021 after beating the odds of advanced lung cancer for four and a half years with spirit and determination and grace. LCFA is grateful that she shared her story with us.

From Coughing Up Blood to NSCLC: Amie Hyman’s Story

Twenty years ago, Amie Hyman was diagnosed with breast cancer. She was fortunate that it was caught early. Her treatment plan consisted of chemotherapy, radiation, and a course of Tamoxifen. In August, 2017, her battle with breast cancer was where it had been for those subsequent 20 years: taking up very little space on her worry list.

Until one day, out of nowhere, she coughed up bright red blood. Two days later, it happened again. She reported to her doctor who told Amie to call if it happened a third time. A few days later, after having again coughed up blood, Amie’s doctor ordered a chest X-ray and CT scan.

“There is something blocking your heart.”

Amie immediately reached out to her oncologist from 20 years prior. While most oncologists are very specialized in their field, Amie’s was lucky in that her oncologist also happened to be well versed in solid tumors. Following more scans and a bronchoscopy, Amie was diagnosed with Non-Small Cell Lung Cancer (NSCLC), Stage 3B. Other than having coughed up blood, the only other symptoms – which she noticed in hindsight only – were having difficulty running and with breathing during hot showers.

Initially, Amie’s tumor was thought to be operable. Further investigation, however, showed just how close the tumor was to her aorta, thereby making it too dangerous to operate.

At the end of her treatment cycle of chemotherapy and radiation in December, Amie was – albeit briefly – NED (no evidence of disease).

As with all lung cancer patients, Amie was closely monitored over the next several months. By June, 2018, scans showed that the lung cancer had metastasized to her brain.

“It was very interesting how I knew there was something happening in my brain. Suddenly I couldn’t put my hair in a ponytail or manage simple tasks like folding laundry. I was unable to type; I thought it was because my nails were too long, but I was unable to cut them! But perhaps most frightening, I would be driving and wondering what all the honking going on around me was all about. They were honking at me. I was veering into the left lane. I knew something was wrong.”

On the day she finally had her brain MRI, she was not able to straighten her arm and thought she was having a stroke. At her local hospital, they communicated with her oncologist and got the results of the MRI which showed 8 tumors in the brain. She was then moved to the hospital at which she was being treated. She was admitted and, at the wee hour of 2 a.m., a team on rounds came into her room and asked her to “do tricks” for them. Among some of the tests she struggled with was the challenge of being able to touch her nose with her right hand, but not with the left, which took upwards of five minutes. The doctors explained to her that this phenomenon is referred to as “hemi-neglect” which means that her frontal lobe was impeded to such an extent that her right side was unable to tell her left side what to do. The most interesting part about it was that she had no idea that her left side was not working.

Biomarker testing revealed that Amie’s lung cancer carried the EGFR Exon 19 biomarker, making her an excellent candidate for targeted therapy. Armed with this new information, Amie began a targeted treatment which, unlike many cancer fighting drugs, is able to penetrate the blood brain barrier. She responded amazingly well to the treatment.

Amie, as you can well imagine, has a lot of feelings about her cancer diagnosis; one might surprise you. She is grateful.

When she was hospitalized with the brain metastasis, her sister Karmit, dropped everything and came to be with her. Together they made a list of everything she was going to need help with. The list was long. In addition to being a self described workaholic – Amie is a highly committed geriatriac care manager – she, along with her husband, owned and rented out several properties that needed to be managed. Amie had been the one taking care of not only their personal finances, but those for the rentals as well. One particular day in the hospital she was feeling extraordinary pressure and frustration; she felt as though her brain was exploding and wound up suffering through a full blown panic attack.

“All of my responsibilities were literally cluttering my brain.”

Amie shared a story about a visit she received from a hospital Rabbi, which she credits with changing her life. The essence of his message was this: it was time to take the burden off of her shoulders and put it in front of her. Now, he explained to her, is her time.

“When we are helping ourselves, others or the world, God smiles on us. When we suffer or hurt, God grieves with us.”

This prompted Amie to begin thinking about retiring and selling the rental properties, allowing her instead to focus on herself. As she came to realize – and take action on these and other things that were overwhelming her – her sense of relief was palpable. It was then that she decided to write a book: “Clearing The Clutter. How Lung Cancer Transformed My Life,” which she is working on as we speak.

After graduating from physical therapy with flying colors, Amie was doing really well…for a time. Quickly issues began to arise.

In May 2019, a new brain met appeared and was successfully eradicated with one round of targeted radiation.

In August of the same year, there was evidence of new growth in her lungs. It was thought to be related to the radiation treatments, but to this day, it is not clear that it is.

In September 2020, Amie and her husband Tim decided to find the bright spots in Covid, her diagnosis and retirement. They rented an RV and hit the open road. In 15 days, they enjoyed the beauty of The Grand Tetons, Yellowstone National Park, The Badlands, Mt. Rushmore, and Crazy Horse. It was, by all measures, a trip of a lifetime.

“I owe my life to research. And to cancer I owe my acceptance and appreciation of the abundances of my life.”