In December 2013, Ivy Elkins was diagnosed at age 47 with EGFR positive stage 4 lung cancer. Her cancer has also metastasized to her bones and brain. Her doctors have treated Ivy successfully with targeted therapy medications since her diagnosis. Now Ivy is lead an active life and handle her lung cancer as a chronic disease. Ivy receives her treatment at the University of Chicago and lives in the Chicago suburbs with her husband Ben and her two teenage boys. She has an undergraduate degree in English from Princeton University and a Master’s in Business Administration from the Wharton School at the University of Pennsylvania.

Ivy is a dedicated advocate for lung cancer research, having served as a consumer reviewer for the Department of Defense Lung Cancer Research Program, completed the AACR Scientist-Survivor program, acted as faculty for the ASCO/AACR Methods in Clinical Cancer Research Workshop, and participated in the program committee for IASLC’s Chicago Multidisciplinary Symposium in Thoracic Oncology. In addition, Ivy frequently shares her patient perspective with the media and with pharmaceutical companies involved in lung cancer treatments.

“When I first was diagnosed, and I found out very quickly that I was EGFR. But one thing that also helped me was I actually did go on Google. Even though everyone told me not to do that. But I looked for blogs and other people, other women my age with kids who were putting their stories out there. Lisa Goldman was one of the people I found. There was stuff out there. And it didn’t necessarily matter at that point so much for me what biomarker it was. It was just the fact that there were people in the same stage of life as me who were managing to live with lung cancer.“

As one of the founding members of the EGFR Resisters Patient Group, Ivy recognizes that new treatments are desperately needed for patients who have developed resistance to currently approved targeted therapy medications. It is her hope that many patients will join forces with the EGFR Resisters in order to encourage new research and clinical trials in this field. Through her advocacy work, Ivy attends many conferences and meetings, allowing her to spread awareness of the work of the EGFR Resisters to medical professionals and fellow patients.

Ivy has been a guest on several Hope With Answers Living With Lung Cancer Podcast episodes:

Participating in the Hope With Answers Video Series, Ivy interviewed physicians to answers patient questions on a variety of topics:

As part of her lung cancer research advocacy work, Ivy was a participant in the takeover of LCFA’s social media for World Lung Cancer Day in 2021. 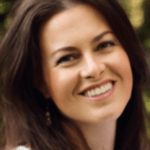