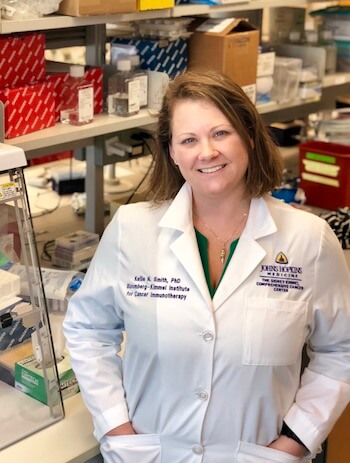 Dr. Kellie N. Smith, a Baltimore, MD native, completed her doctoral work at the University of Pittsburgh School of Medicine with a focus on T cell immunology and immunotherapy. During her fellowship training at Johns Hopkins, she worked under the mentorship of Dr. Drew M. Pardoll identifying the correlates of response to anti-PD-1 immunotherapy in patients with advanced non-small cell lung cancer. She joined the faculty in early 2016 and has since collaborated with Drs. Julie Brahmer and Patrick Forde on multiple lung cancer immunotherapy clinical trials aimed at improving treatment options, preventing disease recurrence, and understanding the predictors of response to treatment in both early and advanced stage lung cancer.

Immunotherapy has changed the treatment of patients with non-small cell lung cancer (NSCLC), especially antibodies that block proteins, called checkpoints, on the surfaces of tumor cells and patient immune cells. However, patients without a history of tobacco exposure traditionally to do not respond as well to these treatments as patients who were heavy smokers. Recent clinical trial and lab based data has shown that the amount of genetic mutations in a person’s tumor is related to response to these treatments (also called tumor mutational burden). Specifically, the more mutations that a tumor has, the more likely it is to respond to checkpoint blockade immunotherapy. We think this is because these mutations are one of the ways that the immune system can recognize the tumor cells and ultimately kill them; we also think these mutations are helpful in making a long term (or memory) response with immune system cells called T-cells. Unfortunately, NSCLC tumors in non-smokers tend to have less mutations than those tumors from heavy smokers. This may be part of the reason why never-smokers seem to not respond as well to immunotherapy. However, recent studies that give immunotherapy in conjunction with or after chemotherapy have hinted that this treatment regimen may be more effective in never smokers. Why does the addition of chemotherapy to the treatment regimen seem to level the playing field?

Kellie also was a Class of 2016 Young Investigator Grant Awardee

Learn about her research