A personal trainer with a bothersome cough

In July 2016, 56-year old Frank was in top physical shape. He knew his body inside and out.  So, when he developed an annoyingly persistent cough, he readily accepted his doctor’s diagnosis of allergies. A personal trainer for over 20 years, Frank didn’t connect his cough to lung cancer. His doctor suspected allergies.

After ten days taking an over the counter medication, however, Frank’s symptoms were unimproved.  His physician ordered sinus and chest x-rays which showed fluid in his left lung. When Frank had the fluid – two full liters – drained, cancer cells showed up in both lungs. Frank, a perfect physical specimen with no symptoms beyond a cough he considered “just annoying”, had Stage 4 lung cancer.

In the spirit of full disclosure, the fact that Frank had cancer was not a total shock.  Both his parents and his sister had all had cancer and it was something of a foregone conclusion that he, too, would develop the disease. In fact, genetic testing would confirm that Frank’s lung cancer grew from a genetic predisposition. Genetic or not, Frank was in for the fight of his life.

The first line of treatment for Frank’s lung cancer was daily oral medication. While on this medication, in the four months since his lung cancer diagnosis, he became a shadow of his former self. On election night, Frank received the results of his first set of scans: everything was worse. By Thanksgiving, his decline was shocking; he and his family were certain he would not live to see Christmas. With no appetite, energy, or motivation, Frank was down 25 pounds. Dragging himself into the gym to train clients, then having to lie down on the mats just to muster the energy to walk to his car,  Frank, a normally upbeat, energetic and motivational guy, was quickly losing faith.

In what felt like a last-ditch effort, his medical team performed a lung biopsy in the hopes of discovering a mutation which might respond to targeted therapy. Frank tested positive for EGFR and immediately started on a new oral medication that had just been approved for his particular biomarker. The very next day, and for the first time in months, Frank felt energized enough to try a few easy exercises at the gym. He was surprised to find himself feeling pretty good. The day after that, he did a full workout. 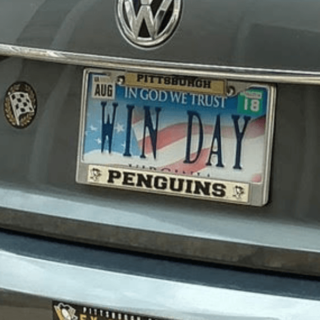 Frank McKenna has been a personal trainer for over 20 years and has recently earned his Cancer Exercise Specialist Training credentials. He is sharing his 4 keys to wellness you can use through your lung cancer journey.

Get Frank’s 4 Keys to Wellness

“It’s like someone flipped a switch. I went from going downhill fast, to climbing back up. During those days when I felt down mentally, I decided to WIN The Day, try to WIN every day one by one. If I didn’t have a good day I would say ‘okay, Let’s WIN tomorrow!’ My team for a fundraising event is Team WINNING The Day. I try to impart this on others in exercise groups, when I do a public speaking engagement or as a phone buddy. I always spell WIN in all caps, because I am going to WIN! My license plate even says, WIN DAY.”

These days, Frank is back to his fighting weight and strength. Not only has he kicked his cough, but Frank also works out daily and just earned his Cancer Exercise Specialist Training credentials. He is so thrilled to be feeling so well and, through speaking engagements, volunteering and sharing his story, his life has new meaning.

“My life is different. I have an appreciation that I am still alive, still kicking, there for everybody. There’s a reason I got this – I need to give back, shine a light, and use it as a platform to educate people. I was never sure what my purpose was…but now I know.”

Frank is thrilled to be reaching people and making a difference. He is also profoundly aware and immensely grateful for continued lung cancer research. In his words,

“I know I wouldn’t be here without it.”

Meet Juanita and read her story of living with lung cancer—from diagnosis to CrossFit.

Learn more about these very effective treatments for lung cancer.