At LCFA we are honored to share the stories of lung cancer patients who are not only fighting for their lives, but managing to find the time, strength, and drive to advocate for more and better lung cancer research.  Millie Torchia was just such a patient.  A member of our Speaker’s Bureau, Millie refused to take her diagnosis laying down. She fought tirelessly to not only spread the message of hope to her fellow patients, but also demanding that more research be done. We are heartbroken to share that Millie has passed away. Her legacy of strength, grace, and perseverance will live on through her husband Glenn and the lights of her life: her three daughters.  It was our privilege to have known and worked with her.

A long road to diagnosis

On September 11, 2001, Millie Torchia was in her 20s, and just starting out her career at a financial company in downtown Manhattan.  Suddenly, the entire building shook. From her office on the 21st floor, just two blocks from Ground Zero she watched in shock at the events happening.  No one had any idea what was going on. Building management instructed them to stay in the building. Yet many, Millie included, raced outside in an attempt to make sense of what was happening.  She was met with confusion. Days later when people were finally allowed back in the building to retrieve personal belongings abandoned in the haste, Millie recalls collecting her and her colleagues’ things.

“My manager and I went in together.  Everything was dusty. We didn’t have gloves or masks. When I think of what we inhaled that day…”

Fast forward to late spring, 2017, when Millie’s fight against lung cancer began.  Now 43 years old, Mille was excelling at her job. Between her three young daughters, a full-time job and what could often be a 90-minute commute, it was not particularly alarming to her that she was feeling exhausted.  It was actually the relentless pain in her shoulder that prompted her to visit urgent care.

A chest x-ray led to a pneumonia diagnosis.  A round of antibiotics did not improve how Millie felt.  In fact, her symptoms actually worsened and went far beyond a sore shoulder She developed a vicious cough. She knew something was wrong.  Listening to her gut, Millie scheduled an appointment with a pulmonologist who corroborated the pneumonia diagnosis, prescribed more antibiotics and assured her that what she was experiencing was typical and that recovery could take a while.

Yet she saw no improvement.

Finally, the results of a CT scan showed a “lot of stuff” in her lungs, enough that, even to her untrained eye, she knew something was very wrong.  She even asked, point blank, if she had cancer. With no risk factors and having never smoked, Millie was repeatedly promised and assured that she did not have lung cancer.  Her physician ordered a bronchoscopy out of what he called an “abundance of caution.”

Much like September 11, it was a beautiful, clear, sunny day when Millie got a call from the doctor.  She went numb. And, while it was originally thought that she was stage 1 or 2, the even worse blow came upon the discovery that the disease had spread.  Millie had stage 4 lung cancer.

Millie’s fight against lung cancer has been a long one, and it has not been an easy road.  Because she tested positive for the ALK mutation, the first-line treatment was oral medication.  Initially, the results were encouraging: many of spots were gone. However, while her lungs looked slightly clearer, her bones did not.

Progression was significant enough to warrant stopping the medication. When over the next several months two other medicines would prove unsuccessful, they moved on to intravenous chemotherapy treatment.  After the second round of chemo, Millie suffered a seizure, followed soon after by one more, which would land her in the ICU. It was determined that, while the chemo was reducing her disease, the danger of another seizure deemed it medically unsafe to continue.

As she recovered from the seizures and regained some strength, she was prescribed a maintenance chemotherapy protocol. Thus far, it has kept her disease from further progression.

“This has been really tough physically, but way tougher emotionally.  Lung cancer is a family disease – as hard as it is for me, it might be worse for my parents, my husband, and my three daughters…it affects everyone, every day.” 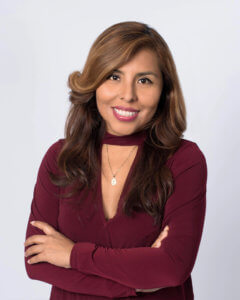 Millie cannot help but believe, that having been in the midst of the September 11th disaster played a role in her having developed lung cancer.  She vividly recalls the sights, smells and even the tastes of that day as though it were yesterday. She applied and was approved for benefits/protection from the World Trade Center Fund.  It is small comfort to her to know that, at the very least, her medical expenses will be taken care of.

More remarkable than Millie’s story was her spirit in her fight against cancer.  A fiercely devoted wife, mother, and daughter, she became a strong and outspoken advocate for lung cancer research.  Learn how you can support Lung Cancer Foundation of America help all those living with lung cancer.

Parenting twins is its own special blessing. Add to that single parenting and add to THAT a lung cancer diagnosis. Meet Alisa Brenes who does it all.