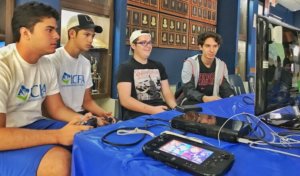 John Suarez adored his grandmother Celina. A Cuban immigrant, she played a major role in his life. He credits her molding him and for instilling in him the pride he has in his Cuban heritage. When she lost her life to lung cancer, he knew he wanted to honor and commemorate her legacy. So John, a senior in the Honors Program at Christopher Columbus High School in Miami, began to work on a plan.

And so was born Smash Lung Cancer, a video game tournament – Super Smash Bros., anyone? –which donates 100% of the proceeds to lung cancer research. What better way for this competitive gamer to pay it forward, honor his grandmother and have fun all at the same time?

Once he knew what he wanted to do, it was time to make it happen. First, he secured a location on campus for the 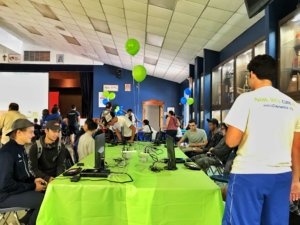 event. He then enlisted the help of friends to create flyers and social media posts. Next, he spread the word by attending video game tournaments around southern Florida and logged countless hours knocking on doors requesting donations of food and prizes from area businesses. Winn-Dixie, Chipotle, Alienwear and local hot spot Arbetter’s Hot Dogs all generously participated.

The final thing to do: determine the best organization to be the recipient of the monies raised. For John, the most important part of the plan was to ensure that the proceeds from Smash Lung Cancer would go directly to research. Ultimately, it was a Google search that lead him to LCFA,

“I looked at a few different places, but when I saw that LCFA puts the money towards research, which I know will make a difference, I knew it was the right place. It’s been great! I would pick LCFA again anytime!”

Last year’s tournament attracted nearly 100 participants and raised just under $3,500, every penny of which was donated to LCFA. The goal – and expectation – for Smash Lung Cancer 2, scheduled for April 15, is to surpass last year’s numbers. According to John, that is “definitely going to happen.”

LCFA is so grateful and appreciative of John’s efforts. If you are interested in holding an event to raise money for lung cancer research please contact Cindy Iker at Lung Cancer Foundation of America  and she will be happy to help you out!

How can you help Smash Lung Cancer?