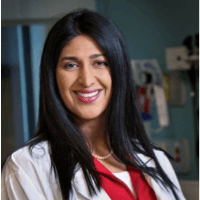 Dr. Natasha Leighl leads the Thoracic Medical Oncology Group at the Princess Margaret Cancer Centre, and is Professor in the Department of Medicine, and Adjunct Professor in the Institute of Health Policy, Management and Evaluation at the University of Toronto. She holds the OSI Pharmaceuticals Foundation Chair in Cancer New Drug Development through the Princess Margaret Cancer Foundation. She has published over 300 peer-reviewed papers, has held (as principal or co-investigator) over $600 million in peer-reviewed grant funding, and has mentored many oncology trainees that have gone on to leadership roles in oncology around the world. Recently, she was awarded the American Society of Clinical Oncology Excellence in Teaching Award (2019).

Dr Leighl’s main interest is in developing new treatments in lung cancer and improving lung cancer diagnostics. She is involved in clinical studies of novel agents for the treatment of thoracic cancers, has led several international and cooperative group studies in lung cancer and has served as a member of the Lung Disease Site Group Executive of the Canadian Cancer Clinical Trials Group. She was Co-Chair of the CCTG Committee on Economic Analysis, Congress Co-President of the 2018 World Conference in Lung Cancer, and serves on multiple committees including the ASCO Thoracic Guidelines Advisory Group, is co-section editor of The Oncologist and Current Oncology, an editorial board member of the Journal of Thoracic Oncology, British Journal of Cancer, a member of the IASLC Quality and Value Committee, on the Scientific Advisory Board of the Lung Cancer Foundation of America, and was recently elected to the Board of Directors of the Americas Health Foundation. Previously she served as Web Editor of the Journal of Thoracic Oncology, on the editorial board of the Journal of Clinical Oncology, the Royal College of Physicians & Surgeons of Canada Medical Oncology Examination Board, and is Past President of Lung Cancer Canada.