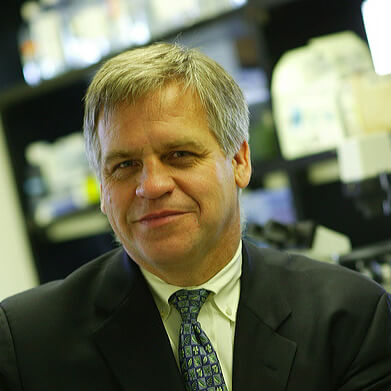 Bruce E. Johnson, MD is the Chief Clinical Research Officer at Dana-Farber Cancer Institute, Institute Physician at Dana-Farber Cancer Institute and Brigham and Women’s Hospital, and Professor of Medicine at Harvard Medical School. His laboratory-based research is devoted to testing novel therapeutic agents for their efficacy against lung cancer and other thoracic malignancies.

Dr. Johnson is a member of the American Association of Physicians. He served on the American Society of Clinical Oncology (ASCO) Board of Directors from 2008-2011, received the ASCO Cancer Foundation’s Translational Research Professorship in 2008, and was selected as a Fellow of the American Society of Clinical Oncology in 2012. Dr. Johnson will begin serving as ASCO President-Elect in June of 2016. He also was awarded the International Association for the Study of Lung Cancer (IASLC) 2010 Scientific Award, given to an IASLC scientist for “life-time scientific contribution in thoracic malignancy research and who has also contributed to the organization’s development.” He was one of the leaders of the team awarded the American Association for Cancer Research (AACR) 2010 Team Science Award that “recognizes an outstanding interdisciplinary research team for its innovative and meritorious science that has advanced or likely will advance our fundamental knowledge of cancer or a team that has applied existing knowledge to advance the detection, diagnosis, prevention, or treatment of cancer.”