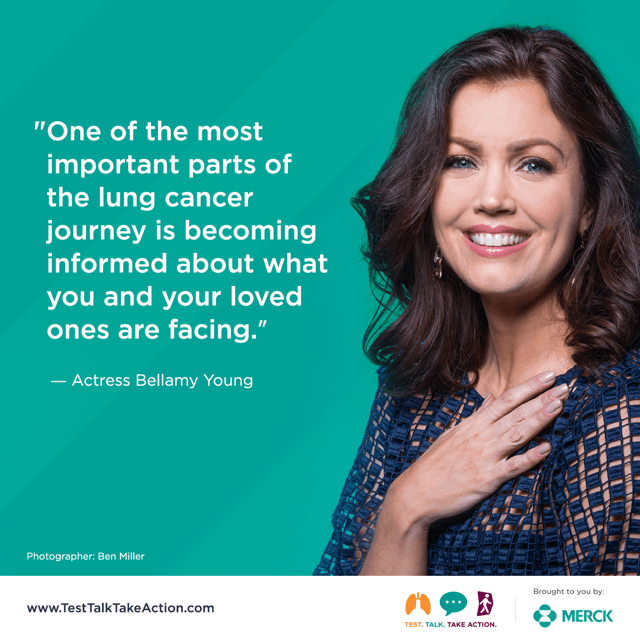 Discussion And Testing Among Patients With Lung Cancer

The lung cancer journey can be tough for both patients and caregivers, but advances in research, like the understanding of biomarkers, are offering new hope in the fight against the disease.

Helping patients to understand the information is the Test. Talk. Take Action. campaign that was developed by Merck in collaboration with six leading lung cancer advocacy partners: Bonnie J. Addario Lung Cancer Foundation (BJALCF), LUNGevity Foundation, Lung Cancer Alliance, Free to Breathe, Lung Cancer Research Foundation and Lung Cancer Foundation of America. Acclaimed actress and singer Bellamy Young, best known for her role on the hit television show Scandal, is also lending her voice to the campaign motivated by her own experience with lung cancer. Young lost her father to the disease in 1985 – just 10 months after his he was diagnosed.

“The discussions with doctors were few because we didn’t have the internet. We didn’t have a way of self-educating,” said Young in an interview with CURE. “There weren’t a lot of advocacy groups at that point, so we didn’t feel we had a community, and the doctors, honestly, didn’t know that much. So the answers we got were a little ineffective.”

It was a time where her family felt very alone, she said. However, she believes the campaign and its website will help patients, survivors and caregivers feel supported on their journey. In addition to explaining biomarkers, the website has a printable worksheet with questions that patients can ask their physicians and links to all of the advocacy groups involved. “It’s your fundamental right to empower yourself with as much knowledge as possible, and then have as free and in-depth dialogue as possible with your doctor to get the most perfectly honed treatment for you that’s available today,” Young said.