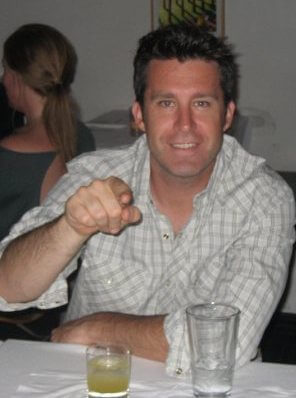 Alex Hanan
As Told By Lung Cancer Foundation of America

TRIBUTE TO ALEX
by Andrea Hanan

This is the 4th year you are not here
But we still celebrate your birthday
Every year.
You always wanted someone else to live,
That is why your tumor to research –
You did give.
One day people will survive, and get through,
Then the world will remember all the people like you.
But for now the pain is our’s –
We feel gyped of all those future hours.
So Happy birthday –
That memory no one can take away,
51 years old you’d be on this day.
HAPPY HAPPY BIRTHDAY wherever you are
We’ll think Heaven
We’ll think that SHINING STAR!

Alex Hanan was in his early 40s; a non-smoking, healthy young man, who exercised regularly, ate relatively well, and had a great group of truly dedicated friends. It was a great shock to Alex, as well as his family and friends, when he was diagnosed with Stage 4 Lung Cancer in January 2014. Sadly, Alex left us on Monday, July 23, 2018, but his story will always be remembered and his spirit lives on in us all.

Alex was not the type of person most people picture when they think of lung cancer, but people exactly like Alex are the new faces of this disease. Here’s what we’re learning about lung cancer in young adults.

One of the challenges in an early diagnosis for lung cancer is that the symptoms of lung cancer, taken on their own, are generally not a cause for worry — or can be mistaken for something else. This combined with the high median age of 70 for lung cancer diagnosis means that patients such as Alex often go undiagnosed for weeks or months, especially if they have no risk factors.

In November 2013, Alex had developed a bad cough and severe shortness of breath. That December, he went through multiple tests, doctor visits, and rounds of antibiotics with no conclusive answers. New Year’s came and went, along with Alex’s birthday, when he got a call from his doctor in January that he had cancer.

Another meeting with an oncologist revealed that Alex’s lung cancer was at Stage 4. Of this moment, Alex wrote in his blog, I Got This, “I woke up a bit in that moment and realized that though Dr. Dan had probably given this diagnosis to patients countless times in the past, it seemed genuinely difficult for him to deliver to me. I put my hand on Dr. Dan’s shoulder, I told him this must be hard for you and I thanked him for being so kind. I told my friend Dan Fogelman about this the next day over breakfast and he said ‘You consoled the Doctor while he was giving you the worst news in the world? Who does that?’”

The benefits of lung cancer research

Although it seems like a poor choice of words, Alex was also lucky to receive his diagnosis when he did.  He was among those lung cancer patients who have been able to benefit from the fantastic strides in lung cancer research in recent years, especially around genetic testing and treatment options.

Genetic testing performed by Alex’s doctors determined that he tested positive for the EGFR mutation. Alex was also deemed eligible for the FDA approved targeted therapy drug Tarceva. Only 1 in 7 patients are genetically eligible for this drug, and only 60-70% of these patients see successful results.

EGFR is one of two common mutations for young lung cancer patients who have never smoked (the other being ALK). Of the combination of EGFR and Tarceva, Alex was told by 3 other leading lung cancer oncologists that “if I have to get Stage 4 Lung Cancer, this is the situation and treatment I want.” Four weeks later, the Tarceva combined with “a new diet and clean living” had reduced Alex’s cough, improved his breathing, and helped him to run 2 miles.

Young adults and cancer care: Treatment options and side effects

As Alex’s lung cancer story continued to evolve, he continued to fight the disease every day.  But Alex, in his own words, urged his friends and family not to worry about him and his lung cancer.  He always said, “I got this.”

And he did have it. He had it under control through 4+ years, through a major job change, and a cross-country move from Los Angeles to Brooklyn.

“The mutation is driving my cancer but it also has brought me alternate treatment options and experimental drugs while not a cure, have proven effective for me so far as well as with other patients that have this gene,” Alex wrote in his final blog post in August 2014. He described his time with Tarceva as “no picnic” due to the side effects, but “when these experimental drugs work on patients, they can work really well. It worked so well for me, that the severe coughing and shortness of breath I had experienced in December, January and February were gone by late March enabling me to go back to work and resume most of my normal life. It worked so well that in late April, I received a negative pet scan showing no signs of cancer.”

In August of 2014, however, Tarceva stopped working for Alex. He was given the options of a new clinical trial for CO-1986, aka the Clovis Drug, which he spent a month testing for to see if he was a genetic match for the drug. His other option was chemotherapy.

Alex’s brother, Dean Hanan, was one of the many loved ones who came together between 2014 and 2018 to support their friend and family member, which also illustrates the other unique aspect of having a lung cancer diagnosis in your 40s: At this stage in life, most patients are also working, raising families, and supporting others. Living with lung cancer is a challenge in and of itself, but balancing treatments or chemotherapy, those side effects, and your life as a young adult is another thing entirely. Dean Hanan’s words of wisdom — “You can’t take care of someone who is sick with cancer if you’re not taking care of yourself,” speaks to the care that’s needed on both sides of the equation for young adults who are diagnosed with lung cancer.

Fortunately, Alex was able to continue his work with Pandora while he went through treatments.

“Cancer of any kind is stigmatizing, but when you are not a smoker and have lung cancer, the isolation can be overwhelming,” social worker Angelique Caba, MSW, LCSW-R, told Oncology Nursing News in December 2018. “In addition, young adults, particularly those in their 20s and early 30s, often feel like they don’t fit in, particularly in their treatment settings. They are either treated in a pediatric depart­ment with patients who are quite a bit younger, or they are treated in an adult setting where a good portion of the patients are typically quite a bit older.”

The future of lung cancer for younger patients

The good news: For lung cancer patients who have been diagnosed while their disease is still in the earliest stages, that figure grows significantly. For every 100 people diagnosed with lung cancer caught at an early stage, 56 will still be living 5 years later. Researchers are actively trying to discover new ways to detect lung cancer earlier.

Between early detection and even more targeted therapies, lung cancer research is a field that is making great strides towards helping patients learn about their lung tumor at an earlier stage and find more effective ways of living longer. Your donation can help us at Lung Cancer Foundation of America to fund more transformative research.

With your help, we got this.