In the months leading up to her lung cancer diagnosis, Brandi Bryant had a persistent cough. Sensing something was amiss, she scheduled an appointment with her primary care physician, but never thinking this nagging cough was lung cancer.

Brandi had an X-ray, then follow-up CT scan. The inconclusive results led to the decision to biopsy her lung. Her doctor sent tumor samples out for further testing. Soon she would learn that she had Stage 3B, ALK+ lung cancer.

Brandi began a treatment regimen of radiation and chemotherapy followed by a year of immunotherapy infusions every three weeks. Despite these treatments, Brandi’s cancer advanced to stage 4.

Brandi made the decision to stop the chemotherapy, continue with radiation and move to targeted therapy. After just 7 weeks on targeted therapy, Brandi’s scans were clear. She was NED (no evidence of disease) and today she remains NED.

“I went from please let me survive to let me thrive. But a year later, everything hit me and I struggled with serious depression. I wish I had had a therapist and I highly recommend that anyone with this diagnosis, particularly the newly diagnosed, find a therapist. Interestingly enough, the pandemic helped me to heal emotionally, gave me time to slow down and move forward.”

Advocating as Part of her Reclaimed Life

With an easy laugh, a great sense of humor, and an even greater spirit, Brandi is living her best life. Since her persistent cough was diagnosed as lung cancer, she has reclaimed her life, been a great mom to her four kids, traveled to Paris twice (once with her kids, once by herself). She  is excited for an upcoming cross country trip.

As a member of our Speaker’s Bureau, she is using her energy, her voice, and her insight to help advocate for any and everyone with lung cancer. 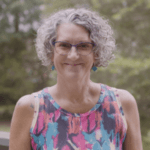